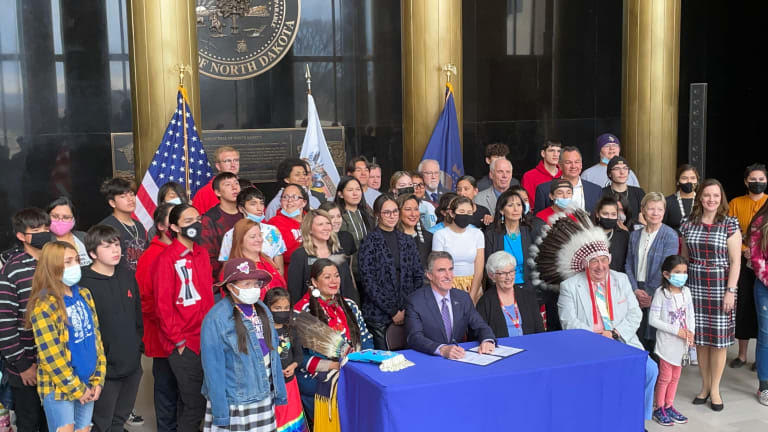 For years, many tribes have felt their history has not been given its due by schools in Connecticut. Soon, however, schools will be required to teach Native American studies, with an emphasis on local tribes, under a law passed this year at the urging of tribes including the Mashantucket Pequot Tribal Nation, best known today for its Foxwoods Resort Casino.

As city officials wrangle under the pressure to reduce urban violence and deal with demands from police unions, homeowners’ associations, and gun lobbyists, residents in some of the most violent neighborhoods in the country have opted instead to pull up a chair and have a sit down.

After 12 Years Of Searching, WWII Veteran Finally Meets Third-Grader Who Wrote Him A Thank You Letter

The note, written by a 9-year-old girl named DaShauna Priest, featured a pencil and crayon drawing of an American flag and a soldier’s helmet with flowers growing out of it. In the letter, the child thanked Frank “for saving us from Hitler” and making “freedom for us.” Incredibly moved by the letter, the soldier never goes without it.

‘I Had A Duty Of Care’: Texas Doctor Praised For Violating New Abortion Ban

The doctor disclosed that he provided an abortion that violated state law on September 6. “I fully understood that there could be legal consequences—but I wanted to make sure that Texas didn’t get away with its bid to prevent this blatantly unconstitutional law from being tested,” wrote Braid.

US Families Step Up To Welcome Afghan Refugees In Their Homes

Kenneth and Adi Martinez have an extra bedroom in the home they share outside of Seattle with their 6-month-old son and 3-year-old daughter. So when the Martinezes watched the coverage of tens of thousands of people fleeing Afghanistan, they stepped up to help. The Martinezes opened their extra bedroom to a family of four who left Afghanistan with all of their belongings packed in a few bags.

The “world’s largest” factory built solely for the purpose of drawing carbon dioxide from the atmosphere and storing it, has just come online in Iceland. As direct a climate solution as there could be, the Orca factory takes CO2 from the air before separating the carbon from the oxygen, mixing it with water and sending it deep underground into basalt rock formations where it mineralizes.