Kirtan — Songs of the Soul

“You can’t think when you sing.” — Shubal

Whether Christian, Jewish, Moslem, Hindu or Jain, bringing voices together to sing God’s name is a universal form of celebration and worship. The Hindu tradition relates that thousands of years ago, God-conscious rishis created the basic phonetic building blocks of the Sanskrit language to vibrate physically in our bodies to awaken kundalini, the “coiled serpent” of spiritual energy running from the base of the spine to the crown of the head.

Kirtan is an ancient sadhana (spiritual discipline) of pronouncing the seed syllables of Sanskrit to create the names of God (of which there are hundreds and hundreds). By putting these mantras to simple melodies, sung in a call and response fashion, the hypnotic repetition of names weaves a deep meditative state and one-pointed focus of concentration. You can’t think when you sing! As the music intensifies, gradually increasing in speed, and the group experience of singing loud together resonates with the vibration created by the vocal cords pronouncing these sacred seed syllables, kundalini rises and you begin your journey up the spine to heaven. The key is to sing as if you are alone in the shower, as the Indians say, “full throatedly.” Put your heart fully into singing the kirtan, close your eyes, throw your head back and open wide so your soul soars with the birds and the space is created for God to come and sing a special response in your ear.

Within the past 10 years, record sales, ticket sales and the popularity of kirtan has grown to the point where many yoga centers in the US have at least one night of kirtan a month. Additionally, there is a large community of kirtan wallahs and wallis (kirtan leaders) all across America advancing the availability of this practice to the general public. Most people find the singing great fun; even those who have been taught they cannot sing can easily find their true voice during kirtan, which is also a great community builder.

Kirtan has its roots in Indian prehistory. In the earliest days of Sanatana Dharma (Hinduism), Brahma gave birth to hundreds of rishis, and the community of the three worlds consisted of Gods and Goddesses in heaven, rishis and munis on Earth along with the rest of humanity, and asuras (demons) in the underworld. In Sanatana Dharma, history is divided into segments known as yugas. The Kali Yuga is the period we are in now, and it is a time of crass materialism and body consciousness. The wisdom taught by the Bhagavad Gita (Krishna’s treatise on spiritual paths) and many sages and saints since Krishna’s time has said that the best way for mankind to awaken kundalini and attain cosmic consciousness in the Kali Yuga is to use these simplest mantras, and to make a practice of repeating them all day long, even when the mind is occupied in other matters. This practice is called japa. A mala (108-bead necklace) can be used for meditatively repeating mantras.

Near the end of the 13th century, a child named Jnaneshwar was born with God consciousness. Even as a 6-year-old child, he gave teachings to the villagers and offered healings. Word got around to the town Brahmins, and they said, “This cannot be.” So they called the boy in before them and said, “If you are a saint, make that cow over there recite the Vedas.” Jnaneshwar said, “The cow and I are one,” and as he began to chant, the cow began to chant with him. 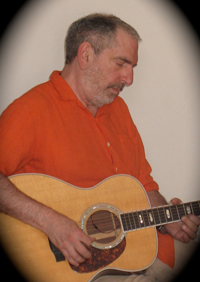 Prior to Jnaneshwar, devotional music in the Hindu tradition was called bhajan and it was composed of long sentences of prayer, sung call and response. At the age of 12, Jnaneshwar began to take the verbs, adjectives and adverbs out of the music and he created namasankirtan (nama-name, san-group, kirtan-sing), changing the devotional music of India from prayer to meditation. He would invite saints from all over India to his home to sing for days on end. Jnaneshwar went on to write the Jnaneshwari, the definitive commentary on the Bhagavad Gita, which is, even today, taught in all Indian schools.

Less than 100 years later a great Bengali saint named Chaitanya was born. He was such a great devotee of Krishna that some thought he was Krishna. Chaitanya began teaching the chant “Hare Krishna Hare Rama” as a way to reach a state of yoga (union) and have great experiences of higher consciousness and bliss along the way. He was the first great practitioner of bhakti (passionate love of God as a path) yoga. He transformed Mogul India, reawakening the Hindu traditions, which were under oppression from the Muslim empire. As word spread around the Muslim empire about this saint, he became a threat, was arrested and was about to be sentenced to death.

The judge asked him “Do you have a last request before I sentence you to death?”

So the judge agreed and before he finished, the judge went into ecstasy, dropped his robes and went dancing into the streets with Chaitanya. The Hare Krishna chant spread throughout India and namasankirtan began to be used as a short cut to meditation. Chaitanya’s lineage passed along through many great saints such as Ramakrishna and Ananda Mayi Ma, right down to today where kirtan is sung not only to Krishna, but to all the masculine and feminine names of God, becoming a rich cultural and spiritual tradition throughout India. At some ashrams kirtan is going on 24 hours a day as a discipline.

Kirtan found its way to the West through one of India’s great gurus from the 20th century, Neem Karoli Baba, who instructed one of his students, Ram Dass (Richard Alpert), to return to America and teach. NKB taught, through Ram Dass, the complex philosophies of Sanatana Dharma (what Westerners called Hinduism) in language they could understand. He eventually suffered a stroke in 1997.

Maharaji (Neem Karoli Baba) now continues to teach Americans through Krishna Das (another of NKB’s disciples from the 60’s).  Krishna Das soared into fame and popularity, and, like Johnny Appleseed, planted the seed syllables of kirtan across America. 25 years ago, kirtan only took place among the devotees of a specific guru. Sai Baba people did their Sai Baba kirtans, and the Muktananda people sang only with their satsang. When Krishna Das’ CD, Pilgrim Heart, hit the charts in 1998, suddenly everyone wanted to sing, whether they had a guru or not, and the focus became more generic and moved into the yoga centers.

Ram Dass used to say, “You can only go as far as your teacher has gone.” It is generally assumed that a kirtan leader has had initiation with a guru and practices regular sadhana. Often, they are supported by the dakshina (offerings) of their community. There are many kirtan leaders who call what they do kirtan, but in reality it is just their own brand of spiritual music. It is good to always ask: Is the leader a good musician, does he or she sing pleasingly, and most importantly, do you feel the rise of kundalini energy from their kirtan?

Kirtan is not about buying your ticket and enjoying the show; it is about opening the doorway to one-pointedness and beyond. By quieting your thinking mind through singing, the information from the chakras becomes audible, allowing you to access exhilarating states of spiritual connection quickly and repeatedly. Through kirtan, music becomes God’s greatest gift and fills the environment with love.