On an August evening in 2009, Doug George-Kanentiio offered a ten-minute oration while the sun was setting. Choosing good words, he spoke about the power of great art, about our prophetic era, and about our relations with the land and each other. At the end, he gave voice to the emerging vision of establishing an Indigenous University in America.

The microphone Kanentiio stood at that evening was set on land about twenty-five paces from "Sacred Rain Arrow," one of the sculptural masterpieces created by the late Allan Houser. Kanentiio's talk was part of a benefit event for Go Native Arts, hosted in the garden of the Houser Estate about 20 miles south of Santa Fe, New Mexico.

An hour after Kanentiio's oration, his wife Joanne Shenandoah stood before the same microphone. By this time the stars had emerged, and Jupiter was strong in the sky to the east. Joanne faced south, centered herself, and gave voice to the enthralling Prophecy Song from her Orenda CD. She was supported with harmonies arising from daughter, Leah, and flanked in the west by the beseeching bronze presence of "Sacred Rain Arrow."

We are now reminded
to be aware of our place upon this earth,
And to fulfill our obligations to ourselves,
our families, our nations,
the natural world, the Creator.

The words sing, we are to awaken.
Stand up, be counted,
for you are being recognized in the spirit world.

Several days after the benefit event, I met Kanentiio again amid a crush of people by the bandstand at the annual Santa Fe Indian Market. We found a quiet place to sit and talk.

To answer my questions about the land, Kanentiio began telling of where he was born and raised — Akwesasne Mohawk Territory on the shores of Kaniatarowanenneh (St. Lawrence River) at the New York-Ontario frontier. The Mohawks are part of the Iroquois Confederacy, and the Keepers of the Eastern Door. Their confederacy is the oldest, active participatory democracy on Earth. With its Great Law of Peace, the Confederacy was a direct example and inspiration for the U.S. Constitution.

A former editor of Akwesasne Notes, Kanentiio is also a founder of the Native American Journalists Association, and the author of several books, including Iroquois on Fire: A Voice from the Mohawk Nation. In collaboration with his wife, Joanne, he is co-author of Skywoman: Tales of the Iroquois.

As we talked in Santa Fe, Kanentiio reminded me that Mohawk Territory straddles the border between the USA and Canada. It's territory that's in both nations, and it's in neither. "Akwesasne is a nexus," he said. "It's situated at a juncture of land and water that is of considerable strategic importance. We straddle the St. Lawrence River at what were once known as the 25-mile rapids.

"Historically at Akwesasne the lives of the people were interwoven with the land and the water. People were called there because the place had all the resources necessary for life, and those resources gave stability to the people and to the community. That provided the Mohawk people with a high degree of cultural continuity, and it gave us a certain power and purpose. We always had that.

"Then in April of 1959 there came a break with this pattern. The St. Lawrence Seaway came into being, and our whole way of life changed. The natural, free flow of the living waters at 25-mile rapids was choked with locks. That energetic change fractured our community. It messed up the fishing grounds, and it separated the people from the water and from the land. We began to metamorphose from a vigorous people to a sedentary people. We became wage earners for the first time, dependent on money, and we began to lose our language. That brought about a huge change in values, and a whole generation of our children began to change from that point onward. 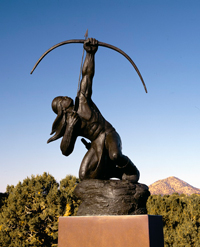 In this context, Kanentiio mentioned Handsome Lake (Ganyahdiyok), the legendary figure who brought gaiwiio (good words) to the people over 200 years ago. Among his life experiences, Handsome Lake was given a vision of the future. He foresaw environmental disasters including air and water pollution, and he offered prophetic cautions.

"Handsome Lake and others warned us that the final assault on the Iroquois — the greatest danger — would come from within. That's what's happening now," Kanentiio said. "In terms of ideals, the Iroquois Confederacy represents something very good. But things change. Metamorphosis has continued and is continuing today, but at a faster pace. In our tradition we have in our creation story an important part about the twins, one twin of the good mind and one twin of the bad mind. That's something to remember. These twins are always present.

"Smuggling of tobacco and narcotics, and gambling — whatever commands a profit — has created a narco-culture at Akwesasne," he said. "Our good, traditional Iroquois values of humility, compassion, simplicity, generosity and communal service have been replaced by greed, intimidation, violence, and death."

(Carlton…can you add a carriage return before this paragraph and a large initial cap for After?)

After hearing this, I told Kanentiio of a meeting that happened about 17 years ago in Montreal. I found myself sitting beside the widely known and respected Hopi messenger Thomas Banyacya in a hotel lobby after he had given a talk. As we conversed, Grandfather Banyacya told me that long ago, when the Earth had gone through another epic metamorphosis, gambling had been the precipitating factor. "That was the last straw," Banyacya told me. "When the gambling and all its related problems built up to a certain level, that triggered the great flood that cleansed the land."

After listening to my story, Kanentiio responded. "We Indian people are supposed to be the custodians of the land, but what we are doing now is running casinos. We are sidetracked. We have lost sight of what we are supposed to do. The bright, shiny thing along the path has enticed many of the people to become lost, to lose track. Handsome Lake warned of that a long time ago, and now it's everywhere.

"The Earth is beginning to stir," he said. "She's beginning to express the dreams and visions of long ago. The Earth is showing us that she's increasingly upset with us. There will be huge changes in this time of reckoning, of healing, until the balance is restored. We are very close now. It won't be subtle. Big winds will come. The Earth will shrug its shoulders.

"We are not able to change this movement toward purification," Kanentiio said, "but we know some things will survive. The Confederacy will endure in spite of itself. That is a shared understanding among traditionals, that despite all the odds the Confederacy will survive and go on, as the larger world will also go on in a new way.

"People feel the urgency of the changes now, and many are motivated to do things. That's good. Preserve what you can. You have to leave something good and tangible behind.

A particular thing that Kanentiio would like to help leave behind is an Indigenous University for North America.

"A few years ago, Vine Deloria, Jr. thought maybe we could take the system of formal education, which had been used to undermine traditional native societies, and reverse its impact by creating our own institution based on the university system," Kanentiio said. "We would create a formal, accredited university where native knowledge keepers would have a place to teach.

"We have native colleges, but an Indigenous University could in time meet and exceed universal standards for learning, and provide formal instruction in all native arts and sciences, of which there are many. It would have a high emphasis on online study. That's a dream of ours."

The Indigenous University would be open to everybody on the planet, no restrictions of race or religion.

"That is typical Iroquois," Kanentiio explained. "Our way is to make it possible that people come to a meeting of the good mind. To get there, you need to sit in respect with one another. You have to invite people from all walks of life and viewpoints to share information, and you have to listen to one another.

"We have the ideas to create an Indigenous University," he said. "What we need now are the physical and financial means to bring it about."

In a related effort to weave indigenous viewpoints into the world's larger framework, Kanentiio and Joanne — as well as other native peoples from North America and around the world — have become involved with the Parliament of World Religions. "We have in part managed to get the Parliament to adopt a native perspective on the Earth: to regard Earth not as a commodity, but as a being."

Kanentiio serves on the board of directors for the Parliament. He noted that the theme of their December, 2009 meeting will be Reconciling with Mother Earth. "My hope for this Parliament," he said, "is that teachers from world's various disciplines — Jews, Evangelical Christians, Hindus, Muslims, Roman Catholics, and many more — can get together again in Melbourne and finally acknowledge that Earth is a living planet and should have standing. If spiritual leaders accept that and take these spiritual understandings to their nations and congregations to make it a guiding principle, then that's a good thing.

"We feel the real revolution in human society will come about through these spiritual changes," Kanentiio said. "It has to happen there first, on the spiritual level. Once we change the spiritual, then the politics will follow. 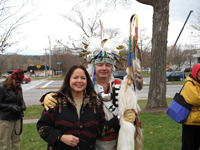 "For me," he said, "the roots of this understanding go back to our Iroquois value that all human beings have equal worth, if not necessarily equal abilities. Everyone's life has meaning. Some are singers and healers, and some are cooks or builders, but each one of us has the blessings of existence. To cultivate this, to acknowledge, to have gratitude for being alive, you can always do that. Our lives are not casual, not by chance. We have been directed here to this time and place, and we are meant to take all of our life experiences with us, all the joys, suffering and pain, and to take it with us with a good mind when we return to the place of living light. That makes the light stronger for the generations to come."

Author's note: Many of the themes articulated in this story are also explored in my epic, nonfiction saga of a North American journey through our era of transition Odyssey of the 8th Fire (www.8thfire.net).

A journalist, professional speaker, and healer, Steven McFadden is the author of six non-fiction titles and co-author of two. His 2009 release, The Call of the Land: An Agrarian Primer for the 21st Century (NorLightsPress), continues his decades-long work with sustainable agriculture and healing our relationship with the Earth. Visit www.chiron-communications.com for more information.