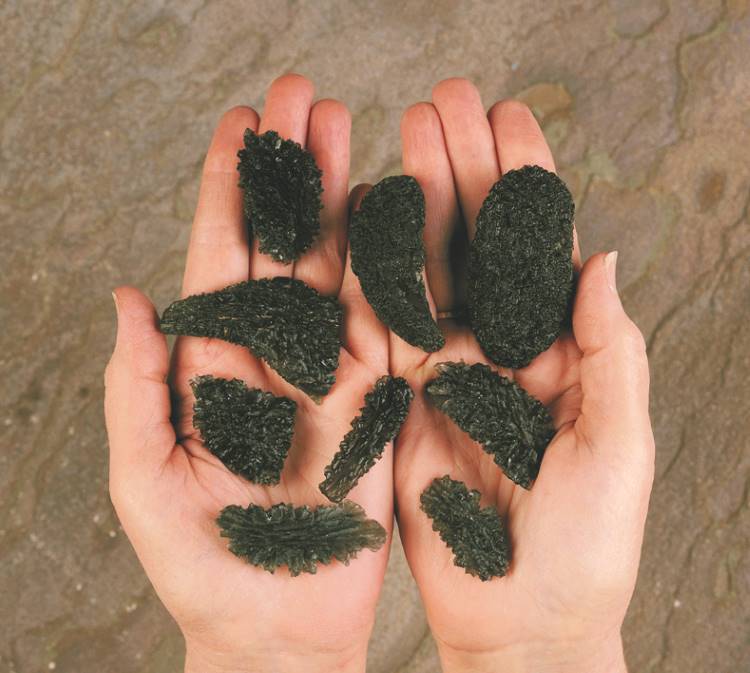 Kyle Russell will present “Manifesting Protection and Immunity with Crystals” at 12:30PM on Sunday, November 14 at the 2021 Natural Living Expo.

Moldavite is a mythical tektite, the official name for material made up of fused extraterrestrial and earthly ingredients. It is the result of an inter-galactic collision of meteoric materials crashing in through Earth’s atmosphere and exploding onto its surface, blending with its raw materials, and then creating a tremendous amount of volcanic liquid glass that blows high up into the air. Most of it hardens before ever reaching the ground, but the extreme heat and journey through the air shapes the droplets into small planets of their own, complete with craters, nooks, crannies and folds.

For me, moldavite is a dramatic and extraordinary topic because it led me into the entire experience of working with crystals and teaching people about them. Back in 1987, I was invited by a friend to go visit the legendary Heaven and Earth crystal shop, which was run by Robert Simmons and his wife Kathy in Gloucester, Massachusetts.

When we arrived at the shop I looked around, but nothing really caught my eye. I wasn’t even really interested in crystals yet. Robert and Kathy were both there, and as my friend milled about the tumbled stones, Robert regaled me with the tale of moldavite and how it had fallen to Earth 15 million years ago. He talked about the history, and how unique it is because it’s a green color, unlike all other tektites in the rest of the world, and can be faceted (which is very cool). But what’s most amazing about moldavite is when you shine a light through it, you get an incredible other worldly green color that ranges from a dull, almost brown to a rich green to a vivid, bright neon green.

After my friend made her modest purchase and we went to leave, Robert gifted me with a small piece of moldavite, which had to be worth $50 or more. I was surprised but grateful. My friend and I left, and as we were driving home on the highway, suddenly I felt an enormous vortex of energy coming from above and the universe sucking the life out of me, right though my body and into my pocket where the stone was. It felt horribly wrong so I took the stone out of my pocket and put it on the floor of the vehicle for the rest of the ride home.

That night when I went to bed, I placed the moldavite up on the mantlepiece, not far from where I was sleeping. I began to dream. In the dream, I was at the food store where I was a produce clerk, arranging vegetables at the front window. A middle-aged woman barely five feet tall with short, curly blonde hair came up outside the window and looked at me. She opened her mouth and let out a sound, the likes of which I’d never heard before. It was harrowing! I looked around to see if anyone else had heard it, but nobody did. It was unlike anything I had ever heard. And then after a pause, and to my utter amazement, I responded using the same language.

I’ve since come to recognize that sound as harmonic singing, a wordless vocalization in which a chord is created with two or more simultaneous overtones. The Tuvan throat singers from the Himalayas do it. Back during the Harmonic Convergence of 1987, practitioners attempted harmonic singing for healing purposes through what they called “toning.”

Between what she said and what I replied, the intensity of the experience so rocked my world that I woke up and sat bolt upright and looked directly at the piece of moldavite on the mantelpiece. It was clear the stone had brought about this entire interaction. I immediately became aware of what our two-phrase conversation included. She had said, “The mother ship is over us; now would be a good time to come home.” I responded to her. “No, I’m not going. I refuse. I’ve been here too long.”

Within days, I had more visions in my sleep, during which this drama played out further. I was asked by a strange (unknown to me) and well-dressed man to show up for a job interview somewhere, but I was instructed not to tell anyone where I was going. I took this to mean I was being set up for an abduction. Needless to say, I didn’t comply.

Then I had a dream where a different woman and I were in a great, big cathedral. Although she was unknown to me, I knew she was a friend. All the organs began to play in concert, delivering a cacophonous, deafening version of the type of expression I’d heard first from the woman outside my store window. I grabbed her hand because I knew we had to get out of the building immediately. I assured her — not knowing specifically what was being said by those great organs, but comprehending the import of their sounds — that if we didn’t get out of there quickly, the entire building was going to dematerialize with us in it.

This was all very traumatic at the time and it took 30 years for me to retell these experiences without getting goosebumps. I eschewed moldavite for 20 of those years because it felt anathema to my existence here on Earth. As someone who’d chosen a terrestrial life, it felt unnatural to connect with something so otherworldly.

I’d had cancer twice, when I was 12 and 18, so I knew what it felt like to be pushed up against the veil, near death and expulsion from this mortal coil. It took some doing, but I had decided — and acted accordingly — not to cross over to the other side, and to instead stay here. Even after I was almost killed in a robbery and when one of my children was almost carried away by a rushing river — both worst-case scenarios — I managed to hold onto life with a steady stream of good luck and perseverance.

But that is not the end of my moldavite story. Within two weeks of my various transformative waking and sleeping experiences, I discovered that I suddenly knew all kinds of things about crystals! I had miraculously become what I call geo-sentient. By that, I mean I had become sensitive to the energies of stones in a very specific way. I suddenly knew intuitively how to feel and focus crystal energies. I had gone from considering rocks inanimate and irrelevant to a deep knowledge that they can be quite impactful. They are rife with positive energies, capable of imparting benefits to our lives that are far beyond our expectations, or even comprehension.

I once named moldavite the alien messenger because it brought me key information from extraterrestrial civilizations. While that might sound completely out of this world, I’m a very grounded and logical person. Apart from that experience, I’ve had a pretty down-to-Earth existence here on the planet. Moldavite is here to let you know about specific high level information. However, I will caution you that a tray of moldavite is like a tray of cell phones. One might connect you to the leader of a galaxy or planet far, far away, but another might take you to the local pizzeria. It’s not guaranteed that every moldavite stone you pick up is going to connect you to extraordinary sources of information. I’m very selective about the moldavites that I pick. I prefer ones that have a harmonious and balanced physical appearance, and I do like large pieces of moldavite, but each moldavite is different from every other one. There is really nothing else like it.

Excerpted from Crystal Energy: Understanding and Working with Stones for Clarity and Flow by Kyle Russell. @ 2021 Kyle Russell. Reprinted with permission of the author. www.crystalconcentrics.com

Kyle Russell is an online crystal personality and educator with three decades of experience working with crystals. His Portal Crystal Gallery is in Arlington, Massachusetts. Visit www.crystalconcentrics.com or Booth #1114-1116 at the Natural Living Expo, November 13-14.