Nature Will Not Wait

The fall of the Berlin Wall and the political storm that swept across the world a little over a decade ago was above all else a testament to the power of the human spirit to tackle adversity. The Cold War had posed a threat to security, liberty, and development everywhere, creating a seemingly insurmountable barrier between the peoples of the planet. Yet, the right mixture of human vision and courageous leadership brought this dark period in our history to a peaceful end. Today we are faced with another threat, already the cause of great suffering for millions: the degradation of the environment. To meet this global challenge we again need a clear and unified vision, determination, and decisive leadership. 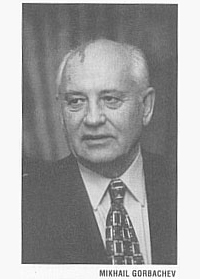 The impact and forecasts of global warming are worsening; desertification, is advancing; deforestation and pollution are endangering our ecosystems; and more than 1.2 billion people do not have access to clean drinking water. We have seen environmental disasters with untold destruction of both human lives and nature: in the short term, during the past months there have been devastating floods across much of Europe and South Asia and the wreck of tankers off the natural treasures of the Galapagos Islands and Australian barrier reef; in the long term, vast areas of the Earth have been irrevocably scarred by the loss of ancient forests, mismanagement of river basins, and contamination.

Many environmental experts warn that these trends are now far too advanced for us to achieve real sustainability by means of gradual change; they believe we have 30 to 40 years in which to act. Time is short and we are already lagging behind.

Green Cross While there are increasing number of bold initiatives led by government and corporate leaders to protect the environment, I do not see emerging the leadership and willingness to take risks at the scale we need to confront the current situation. While there are an increasing number of people and organizations dedicated to raising awareness and provoking change in the way we treat nature, I do not yet see the clear vision and united front which will inspire humankind to respond in time to correct our course.

The example of the failure of leadership at the climate-change talks in The Hague last November is disturbing. This failure lies at the hands of our political leaders, particularly the United States, which has not yet even ratified the treaty, and to a lesser extent the business community, which has increasing influence over government policies. Another worrying example of how we are going about things the wrong way is the increasingly closed nature of the annual World Economic Forum in Davos – isolating delegates and pushing other interest groups further from the mainstream. In The Hague and in Davos we saw divisions into camps: North versus South, and pro- versus anti- "globalizationists."

This is a very grave situation. It is critical that we find a way to bring about rapid, sweeping change of human consciousness and actions worldwide – something that enables us to provoke a large-scale shift of course in a very short time. This cannot be achieved if we remain divided.

The end of the Cold War offers an example of people powered change that positively altered the course of history. We need a similar shift – a fundamental shift in values – to ensure that we do not miss this window of opportunity to save our beautiful planet, and ourselves. First among the threats we must face are those posed by nuclear and other weapons of mass destruction, the fresh water crisis, and the impact of climate change.

A new way of thinking, a new world order that is based more on justice and equality and less on profits, is needed. We thought the fall of the Berlin Wall would usher this in, but instead a more complicated world has resulted and, more worrying still, we are now even seeing signs of a resurgence in militarization.

What can be done? What kind of leadership do we need? I consider five points to be vital in this respect:

If nothing is done to achieve sustainability in the first part of this new century, the prospects for humankind's survival will diminish. Still, if I thought it were hopeless, I would not join you in the environmental movement as President of Green Cross International.

Nature is giving us all the signs we need to develop a common vision for the future; we must grasp this message and act now. Governments, individuals, business – let us move together, with bold leadership, to solve the environmental crisis. Nature will not wait.