Oil, Meat and Getting Serious About Saving the Planet

No one wants to see the Earth’s delicately balanced natural environment collapse under the weight of human-generated pollution and runaway global warming. Nobody longs for the mass extinctions, very possibly including that of Homo sapiens, which would surely follow such an event. Nobody looks forward to sending their children to fight and die in bloody wars over access to oil and other dwindling natural resources. No one is okay watching 18 million people die yearly from starvation, while elsewhere, millions suffer epidemic obesity from consuming many times their fair share. But we falter before the seeming impossibility of tackling such issues head-on. The interwoven political, social, economic and ecological complexities fueling such catastrophic global events seem insurmountable, especially when we are each just one person…

The simple truth is that ninety percent or better of all the intertwined ills currently challenging humanity, and through us, all life on Earth, are deeply rooted in only two globally-pervasive human activities: the use of fossil fuels and eating meat.

Chances are you’re well aware of the dangers of petroleum. The greenhouse effect, the chief culprit behind global warming, is caused by the buildup in the Earth's atmosphere of certain heat-trapping gases, the most prevalent of which is carbon dioxide, produced when fossil fuels are burned (gasoline, home heating oil, natural gas, coal), and which accounts for approximately 85% of total US greenhouse emissions. The process of pulling oil out of the ground devastates the local environment. The non-fuel products we make from the stuff, such as plastics, ink, synthetic rubber, paint, insecticide, fertilizer, dishwashing liquid, disposable diapers, etc., are often environmentally hazardous themselves, practically non-biodegradable, or both. Oil spills routinely ravage coastlines and ocean ecosystems, often causing irreversible environmental degradation. In the face of soaring energy prices, increased global temperatures, violent weather patterns and melting polar ice caps which are expected to result in disastrous increases in sea level, etc., it is no longer possible to deny the dangers of the use of fossil fuel for the planet and for people everywhere.

You may be less aware of the equally disastrous impact of eating meat, both on the environment and on world hunger:

Oil use and meat consumption combined account for such a staggering percentage of humankind's grossly-oversized "ecological footprint" — a measure of how much land and water is needed to produce the resources we consume and to dispose of the waste we produce — that it is almost impossible to find even one truly pressing contemporary issue challenging humanity that cannot be traced directly to the doorstep of one or the other of these industries, and very often to both. Ultimately, this is good news, because acknowledging the concrete causes underlying most of our global-scale difficulties — oil use and meat consumption — and holding ourselves accountable through our daily choices, empowers us to resolve a wide array of interconnected global problems with well-targeted personal actions. To stave off global environmental meltdown, feed the world, and reduce the size of our ecological footprint to the point that many times our present number can peaceably share the Earth without straining its human carrying capacity, we need to stop using oil and stop eating meat.

So why aren’t we doing it? Oil, of course, is the most challenging. Until some new technology is developed to actually replace gas-powered vehicles, along with the infrastructure of highways, gas stations, repair shops, etc., we will still need our cars to get to work, take our children to school, transport food and other commodities, etc. The move from fossil fuels to renewable sources of energy is a change that will sooner or later be forced on our species as world oil supplies peak and rapidly dwindle to zero in coming decades. Any steps we can take to help proactively pull the plug in advance of the inevitable crash, thereby reducing the extent of the long-term environmental damage we'll have to recover from, are well worth the effort. We can build solar homes, purchase alternative-fueled vehicles, ride bicycles to work or school. These are all good and useful things. But even with these changes, when the inevitable peak oil turning point comes, breaking free of oil dependency is a passage our species will traverse en masse. Whether as an exciting opportunity or a terrible human tragedy, navigating this global energy watershed is a great work we will all accomplish, or fail to realize, together. 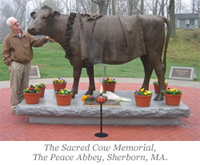 Eating meat, on the other hand, is a solitary choice. No law requires us to continue supporting the meat industry by purchasing and consuming its products. No new infrastructure is required for us to transition to a vegetarian diet. Cultural fears that a meat-free diet can’t supply sufficient protein or other important nutrients has been proven false by all manner of scientific research in recent years, not to mention by the lives and generally exceptional health of generations of vegetarians and vegans for thousands of years in India, China, Japan and other Asian nations where Hinduism and Buddhism are widely practiced. While eating meat cannot be shown to offer any health benefit over a plant-based diet, just about every health deficit you can think of has been directly or indirectly linked to meat consumption, from breast and colorectal cancer to cardiovascular disease to obesity and so on. Conservative estimates by health care professionals suggest that in the United States alone, between $60 and $120 billion dollars a year in medical expenditures can be directly attributed to the consumption of meat. In 1997, the US meat industry had gross receipts totaling roughly $100 billion, making the whole industry a net loss for the American economy when the health effects are factored in.

It's easy to feel powerless in the face of looming crises like global warming, environmental degradation, peak oil, and the devastating human toll of food and clean water shortages throughout the world. We can easily appreciate the painful overwhelm driving so many people — maybe even ourselves — to respond by throwing our hands in the air in confused frustration. We are each just one person….can just one person really make a difference?

The simple answer is, yes, we can. Each and every one of us holds the power, right here in the real world, to chop our ecological footprint in half or more, to dramatically decrease the amount of greenhouse gasses generated each day on our behalf, and to take a powerful, personal step toward ending world hunger by making simple choices.

Mahatma Gandhi said, "Become the change you wish to see in the world." Choosing to embrace a vegetarian diet is a crucial first step everyone can take right now, today, to bring our world one person closer to sustainability, balance, equity and peace.

Adapted from “What Would Buddha Eat?," a chapter within The Simplest Path to Personal and Planetary Awakening, Step One: Free Your Mind, by Vincent Casspriano, Jr. (2006, New Paradigm Press) For more information visit http://www.thesimplestpath.com or http://www.newparadigmpress.com.