Picture A World Without Honey Bees

"No loss may be greater than the food supply of tomorrow." — Patricia Burke

In 2007, the term Colony Collapse Disorder (CCD) was coined when honeybees in 24 U.S. states and four continents began disappearing. Worker bees failed to return to the hive, leaving the uncapped brood abandoned. Normally, honey scavengers including wasps and bees from other hives rob a failing bee colony. But in the startling case of CCD, the hives were left untouched.

Honeybees are not native to the United States, arriving instead on ships with the European colonists, but they now dominate the pollination industry in the U.S. According to the USDA's Agricultural Research Service (ARS), bee pollination is responsible for $15 billion in added crop value annually.1 Honeybee pollination is essential to the food chain. California's almond industry is 100% dependent on honeybee pollination, provides 80% of the world's crop, and employs half or more of the country's commercial beehives during the two-week flowering season.

In The Land of Milk and Honey

Previously, a multitude of pollinating species foraged the land. Because honeybees are cavity nesters and don't create their own homes (contrasted with wasp nests), herbalists and farmers kept honeybees by providing shelter, such as round straw bee skeps. Gardeners tended honeybees as part of a unified diverse ecology and only truly excess honey was harvested.

With the commercialization of beekeeping in the 1920s, honeybees became a commodity managed for both honey production and pollination. Unnatural practices were introduced that weakened the vitality of the honeybee species, making it more susceptible to parasites, viruses, bacteria, and fungi. 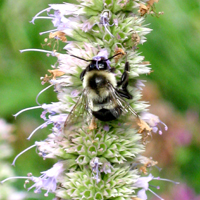 In 1923, in a series of lectures presented at the Goetheanum in Dornach, Switzerland, Rudolf Steiner — the founder of Anthroposophy, Waldorf education and biodynamic agriculture — predicted that the honeybee would be in dire straights in 100 years. Translated from German in 1998 by the Anthroposophic Press, Bees is a transcription of these lectures in which Steiner describes the spiritual wisdom inherent in the bee, wasp and ant kingdoms, as well as their role in maintaining formic acid levels, which are crucial to Earth's ecosystem.

Specifically, Steiner warned against the long-term effects of sugar feeding and artificial queen breeding, practices developed to boost productivity in commercial beekeeping. In years of heavy spring rain, flower nectar is scarce. Beekeepers responded by providing sugar syrup. This practice became the industry standard when both sugar and corn syrup were found to boost honey production. Steiner noted that the unnatural diet was over-stimulating, and altered the bees' digestive juices and blood, wherein the vitality of a species is held.

As for the queen, biodynamic farmer Gunther Hauk of Spikenard Honeybee Sanctuary in Floyd, VA, writes in Toward Saving the Honey Bee, "The queen of the honeybee hive produces hundreds of thousands of offspring. On a good day in May or June, she can lay several thousand eggs — a marvelous feat for her metabolism. Certainly the queen bee has an intimate and deep relationship with the workers. All of them are her progeny and she is the one that gives them a sense of belonging, the individual smell of the colony."2

In nature, new queens develop within existing hives, resulting in swarming. In May the colony is in a peak state of abundance, and, continues Hauk, "a remarkable event occurs. A few days before the new queen (usually more than one) emerges from her cell, on a fair day in the late morning, the old queen and approximately one half of the workers, as well as a number of drones, leave their beloved hive. The swarming begins!"

To make handling more convenient and cost efficient for most of today's commercial beekeeping enterprises, rectangular painted wooden houses have replaced round straw skeps, and plastic foundations, which may contain the carcinogen benzene, have replaced part of the honeycomb. In addition, queen breeding is accomplished mainly through artificial grafting of worker larvae. To further boost production, queens are replaced every year.

In Queen of the Sun, What Are the Bees Telling Us (2011, Clairview), contributing author Horst Kornberger explains that when the old queen is taken away, orphaning the hive into a state of survival stress for several days, it boosts their acceptance of a new artificial queen. Gunther Hauk provides an apt metaphor: the assumption is that the queen can be replaced like an automobile spark plug, without recognizing the deep and living intimacy of the queen with her colony. The life expectancy of queens is halved.

An ARS steering committee is coordinating a comprehensive effort to research factors contributing to CCD, focusing on three major possibilities:

According to the ARS, "Stress, in general, compromises the immune system of bees and other social insects, making colonies more susceptible to disease. These stresses could include high levels of infection by the varroa and tracheal mites; poor nutrition due to apiary overcrowding; pollination of crops with low nutritional value or pollen scarcity; exposure to limited or contaminated water supplies; and migratory stress brought about by increased needs for pollination." 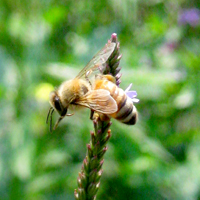 In addition, anecdotal studies from India and the UK reported on CNN and elsewhere report that direct cell phone activity near hives ceases the production of honey, decreases egg laying by the queen and dramatically reduces the size of the hive.3 While EMF waves have often been suspected of contributing to CCD, questions linger about the safety of cumulative EMF exposure for all living beings.

Migratory stress also takes its toll on the bees. Beginning in January in the U.S., honeybees are trucked up to 100,000 miles per year because intensive pollination is necessitated by industrial mono-crop farming methods. ARS statistics note the number of managed honeybee colonies has dropped from 5 million in the 1940s to only 2.5 million today. At the same time the call for hives to supply pollination service has continued to climb, meaning bee colonies are trucked further and more often.

Industrialized agriculture has attempted to counter the loss of honeybee populations by genetically breeding new bees immune to predators, the development of stronger antibiotics that mask weaknesses in the bee's immune system, and eradicating whatever appeared to breech the integrity of the hive last year through the broad application of poisons the next year. Experience has demonstrated that new pesticides breed stronger, more resistant strains of whatever they seek to destroy.

"We are inching our way toward a critical tipping point," said Steve Ellis, secretary of the National Honey Bee Advisory Board (NHBAB) and a beekeeper for 35 years, "and we believe pesticides play an important role in what's going on."

Of particular concern is a group of pesticides called neonicotinoids (neonics for short), many of which are banned in Europe and other countries. Instead of being sprayed, neonics are used to treat seeds using time-release technology, transforming plants themselves into poison factories. As the pesticides are absorbed by the plant's vascular system, they attack the central nervous systems of bees collecting pollen. Virtually all of today's genetically engineered Bt corn is treated with neonics. Corn does not require honeybee pollination, but research shows that bees forage in corn. They also have multiple other routes of exposure to neonics.4

Dr. Vandana Shiva is the founder of Navdanya, an organization that helps preserve and distribute native seeds to farmers. Her organization has been working in the Punjab region of India, which was transformed into a toxic wasteland by the use of pest-vulnerable, non-renewable GE hybrids that required intensive irrigation.

"The beauty of the seed is that out of one you can get millions," she writes. "The beauty of the pollinator is that it does the work of turning that one into a million. And that's an economics of abundance of renewability, an economics of mutuality that to me is the real economics of growth…We must recognize, as its says in one of the Upanishads, that everything is food; everything is someone else's food, and the highest sacred duty is to provide food in abundance and bounty and safety to all beings in your sphere of influence. Not just your child, but all beings in your sphere of influence."5

A new generation of green beekeepers is using holistic approaches for pest control. Christy Hemenway of Gold Star Honeybees in Bath, Maine is a leading proponent of virgin wax production.

"The pesticides that have been used in beehives to treat for varroa mites are what we call 'wax-soluble,'" notes Hemenway. "This means they literally dissolve into the bees' wax honeycombs. And not only do bees live on this wax, but they store their honey in the wax comb cells, and they raise the baby bees there. So when those pesticides dissolve into the wax, they affect everything the bees do."

Individuals can support bees by planting beneficial herbs and wild flowers and eliminating the use of all pesticides. The Queen of the Sun website lists 10 things you can do to help the bees, such as planting plenty of the same type of bloom together as bees like volume of forage, supplying a little water basin, and enjoying your lawn full of clover and dandelions, a haven for honeybees.6

There are many similarities between the corrections necessary to address the disappearance of the honeybee and the deep challenges facing mankind. Both human and honeybee health has been eroded by poor nutrition and an unnatural lifestyle. Perhaps the most significant gift honeybees offer humanity at the dawning of the Age of Aquarius is the ideal of the "group soul," where the instinctual behaviors of each organism alchemize for the good of the whole. Without pollinators, no loss may be greater than the food supply of tomorrow.

Patricia Burke is a writer and meridian yoga teacher in Gloucester MA. This article is excerpted from the full length version available at www.theceresinitiatives.com