It’s a sad day in the history of conscientious objection to war as the world lost Muhammad Ali on Friday, June 3, 2016. He led a generation of pacifists to refuse induction into the armed forces and demonstrated that the toughest times in life may be when you are the most gentle, as when he said no to being part of the US war on the Vietnamese people and losing his heavyweight boxing title. He lost the most coveted, career title in boxing but gained the title that was most important to him in life: Conscientious Objector.

Ali received the Peace Abbey Courage of Conscience Award on May 4, 1994, following the unveiling of the Memorial Stone for Unknown Civilians Killed in War on the grounds of the Abbey. He received the Award from peace activist and founding editor of AFSC Peacework Magazine, Pat Farren, who years later would be honored with the Award as well.

Muhammad Ali, as far as I am concerned, is the patron saint of Conscientious Objection and a role model for my generation on issues of war and peace. Ali's example shaped my thinking about participation in the military, which led to my discharge as a CO. My alternative service as a conscientious objector was creating The Life Experience School in 1972 for individuals with learning challenges, which in turn established the Peace Abbey in 1988, and eventually led to the creation of the cemetery for conscientious objectors. His spirit lives on whenever people say no to war.

When Ali accepted the Peace Abbey Courage of Conscience Award in Sherborn, he said in a slow, pensive voice, "I never thought I would live to see the day that I would get an award for being a conscientious objector." He smiled as peace activists from throughout the East Coast rose to their feet to give him a standing ovation. He spoke briefly about his humanitarian efforts as a devout Muslim, while his wife Lonnie watched with a gentle smile on her face as her husband was being honored for a difficult chapter in his life that was, on a moral level, his greatest fight of all — the fight to follow his conscience and refuse military induction.

The National Registry for Conscientious Objectors was inspired by Muhammad Ali at the Peace Abbey in 1991. Thousands of people from all walks of life have signed the affirmation statement as conscientious objectors and continue to do so at the Peace Abbey Foundation Center in Millis and at the foot of the Gandhi statue in Sherborn.

The Peace Memorials (Pacifist Memorial with the Gandhi statue, Sacred Cow Animal Rights Memorial with Emily the Cow statue, and the cremation cemetery for conscientious objectors) are open to the public each day from dawn to dusk. Parking is on the side street next to the town war memorial. 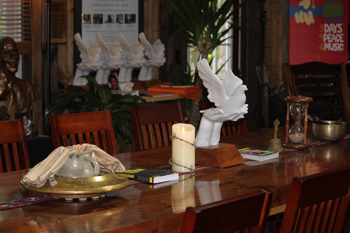 The passing of the Peace Abbey blessing bowl continues to this day in Millis at the Peace Abbey Foundation Center on the grounds of the Life Experience School. Visit the collection of Peace Abbey furniture, art and artifacts at the Center and Archives for Peace, Social Action, Public Policy and the Arts at UMass Boston’s Healey Library.

See also:
The Bravest Response To Fear
To Be A Drop Of Peace