If you want to decrease your sugar intake and are concerned about the safety of artificially manufactured non-caloric sweeteners such as Splenda®, Sweet ’n Low® or Equal®, then consider using stevia.

Stevia is a small shrub of the chrysanthemum family that has glycosides and steviosides in its leaves, which make the leaves very sweet. Most forms of stevia are about 10 to 15 times sweeter than sugar; however, some extracts may be as much as 200 to 300 times sweeter. The sweet taste of stevia takes longer to register in your mouth, but it also lasts longer. 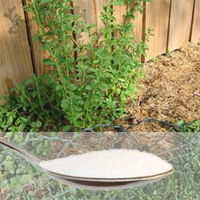 Stevia grows naturally in Paraguay and Brazil, and it’s thought to have been used as far back as the pre-Columbian era as a medicinal tea for heartburn and other ailments. These days it’s used primarily as a non-caloric sweetener and is being cultivated in Mexico, Canada, Japan, China and in other Asian countries. China is the world’s largest exporter of stevioside. The Japanese started using stevia in the 1970’s as an alternative to cyclamates and saccharin, which are thought to be carcinogenic. They now consume more stevia than any other country and use it in gum, candies, diet sodas, yogurts and other foods.

Since stevia is virtually a “no calorie” food and has almost no effect on blood glucose, it’s a very attractive option to diabetics, low-carbohydrate dieters and to anyone else who wants to cut down or eliminate caloric and/or artificial sweeteners. Stevia is most typically available in the form of dried leaves, a powder, or a liquid extract. These extracts are heat stable, which means that they can be used in cooking and baking. However, stevia does not caramelize or crystallize the same way that sugar does. So, for example, you can’t make meringue with it. Also, some stevia extracts have a bitter or liquorice aftertaste, especially when used in large concentrations.

While stevia is a naturally occurring herb and requires no patent to produce it, it’s not without controversy. In 1991 the US FDA labeled stevia as an “unsafe food additive” and restricted its use and importation. It remained banned until 1995 when the FDA revised its position and permitted stevia to be used as a dietary supplement (but not as a food additive). Many stevia proponents believe that the FDA was and still is politically motivated by the artificial sweetener industry. In 2006 the World Health organization compiled a stevia safety evaluation and determined there’s no evidence of carcinogenic activity but concluded that further study is required to identify proper dosages.

Several brands of stevia are easily available online. Sweet Leaf brand is typically available at health food stores and in grocery stores that specialize in organic food lines. Try substituting stevia in your diet in place of sugar and watch the healthy results. Your body will thank you!

Karen Bentley is the founder/CEO of The SugarFree Miracle™ Diet, a powerful no-sugar/no white flour approach to weight loss. For more information about programs, products, seminars and boot camps visit http://www.sugarfreemiracle.com or call 603-253-4800.