The Age of Miracles: Embracing the New Midlife

I began my career giving talks about A Course in Miracles in 1983. In 1992, I published my first book about it. In 2007, having been reading the book for three decades and lecturing on it literally thousands of times, I came out of meditation one day and thought, I’ve become an advanced student of the Course. Not an advanced practitioner, mind you, but an advanced student. And that took 30 years.

What is it about spiritual knowledge that takes so long to digest? The trendy nature of much contemporary seeking would lead you to think that you spend a year or two at the ashram and voilà! — you’re at the mountaintop. But my experience argues otherwise. It takes a decade to understand the basic nature of spiritual principles, another decade while the ego tries to eat you alive, another decade while you try to wrestle it to the ground, and finally you begin to walk more or less in light. Anyone who thinks a spiritual path is easy probably hasn’t been walking one.

By midlife, you’re probably aware enough to understand which of your issues most need attention. You’ve learned where you’re strong, but also where you’re weak. You know what parts of yourself to be proud of and what parts of yourself should change. You know what your issues are this lifetime. It might not be a time when you’re learning new things about yourself so much as understanding more deeply what you already know. And new levels of self-awareness bring new opportunities for breakthrough. 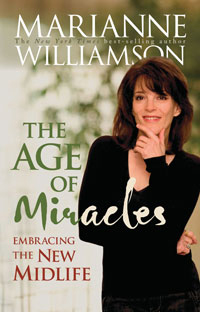 This is not the time to stop working on yourself; it’s the time when you’ve finally accumulated enough clues to help crack the case and solve the mystery of why and how you’ve sabotaged yourself for so long. It’s not the time to give up and say, “This is just how I am. It’s too late to change.” Quite the opposite — it’s time to take a stand, once and for all, against the enemy inside. Don’t worry that it took you so long to get to this point. It takes everyone this long. We know nothing until we know all the ways that we’re not who we should be. Only then do we have a chance at becoming the people we’ve wanted to be, and God intended us to be, from the day we were born.

For that reason alone, these are sacred years.

Whatever powers we might lose with age are small compared to the powers we stand to gain. There’s a profound satisfaction in finally giving up something meaningless, for no other reason than that we did it to the max and now we’re ready to move on. Midlife is about surrendering things that no longer matter, not because our lives are in decline but because they’re on an incline. Traveling upward we simply let go of some baggage. Maybe there’s more natural wisdom in what’s happening to us now than we think. Of all those things we can’t remember, it is possible that any of them are completely unimportant? Could it be that nature is demanding rather than just requesting that we simplify? The only way we can peacefully age is if we have respect for the demands of the experience.

It’s almost embarrassing to admit, but sometimes it’s a relief to get to finally slow down. You realize “slower” is not necessarily “worse than.” The speed of our former years was not as constructive as it appeared to be. Moving too fast, we often missed a lot. Many of us made big mistakes we might not have made if we hadn’t been moving through life so quickly.

How interesting it is that the spirit should begin to open up as the body begins to shut down. It’s very humbling to watch the body age. The arc of human history is coded into our cells: our bones, muscles, organs, and reproductive systems are all moving into a different mode at midlife, in an unmistakable drive toward hopefully distant, but eventual, death. Yet there is much we can do to enliven the body, including enlivening the mind. We can, in many ways, transform the forces of death into renewed and sanctified life.

We can treat our bodies not as things that are slowly failing us, but as our partners in rebirth. If we identify only with the material world, then age creeps into us like an unwanted guest who’s come to stay. But if we identify also with our spiritual existence, then our attitude toward the body becomes one of deep appreciation and gratitude. It’s the house our spirit lives in, after all. When we walk, bike, do yoga, lift weights, eat correctly, take herbs and vitamins, or do whatever we can in order to treat the body well, we’re not just staving off death; we’re affirming life. With every stretch of the body, we help stretch the mind. With every stretch of the mind, we help stretch the body. And one stretch at a time, we’re renewing them both.

According to spiritual literature, the body will be with us for as long as it serves the function of the soul for us to remain here. When I was a younger woman, I took my body so for granted. In midlife, I feel so grateful for it, and to God for giving it to me.

There’s something about having less of something — less energy, less time, less whatever — that creates a poignant shift in our sense of its value. The body is a miracle, after all. It seems to me that with age should come a greater willingness to treat it lovingly, and with care. Our body deserves some kindness after all it’s been through. And you probably do too.

Excerpted from the book The Age of Miracles: Embracing the New Midlife by Marianne Williamson. (Hay House, 2008. Visit http://www.hayhouse.com.)