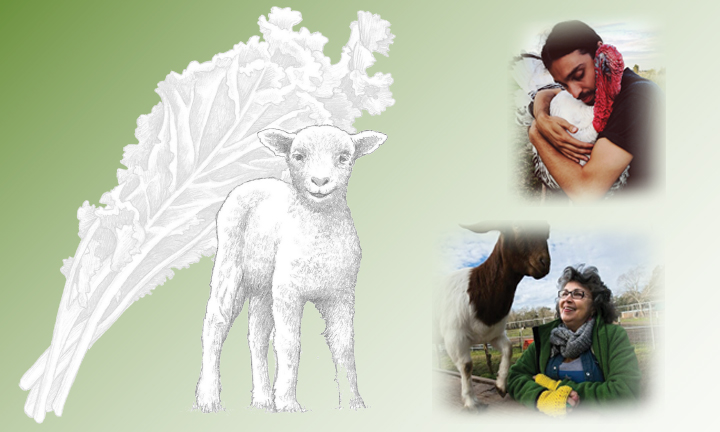 If you are vegan, you eat plant-based. But if you eat plant-based, you’re not necessarily vegan. Veganism is not a diet. It’s a moral stance against harming animals for any human desire or need. The humane awakening to compassion and proactivity, distinguishes veganism as a social justice movement, not just a form of consumption. The following are resources that support this journey from consciousness raising to animal activism to the healthiest food choices.

When you watch the plight of farmed animals, seeing is changing. The film DOMINION is a critical exposure of the daily holocaust that is animal agriculture. When you allow yourself to look, which is no small feat, you soberly awaken to the need to end these horrific practices and rebirth a humane world.

In major cities across the world dedicated volunteers wearing black hooded clothing and white masks stand in square formations holding TV monitors showing scenes from Dominion. ANONYMOUS FOR THE VOICELESS (AV) is a well-organized group dedicated to raising consciousness and ending animal suffering. Consult AnonymousForTheVoiceless.org for a group near you, or to organize one.

EARTHLINGS EXPERIENCE is an outreach group using similar methods to AV. On EarthlingsExperience.com, you will find all the tools you need for organizing outreach in your area. This site has a library of vegan education, from important lectures and documentaries on the vegan imperative, to the why’s and how’s of plant-based health.

Learn the truth about animal protein and chronic disease. The film, FORKS OVER KNIVES (2011) exposes medical industry’s dependence on the myth that humans need animal flesh, along with solid evidence to the contrary. The film features T. Colin Campbell, author of The China Study, the largest medical nutritional study in history that supports the whole food plant-based diet as the healthiest choice for preventing and often reversing disease.

On this journey, you encounter many role models of effective communication. ED WINTERS (“EARTHLING ED”) is a gentle man with a fierce spirit. See his Ted Talk and documentaries on YouTube, and subscribe to his channel at EarthlingEd.org. He never loses his polite composure in his conversations even in the face of the most irrational justifications of animal abuse.

Going vegan means committing to a lifetime of challenging exchanges with those around you. Meet MELANIE JOY, a world renown psychologist who teaches the art of communication between vegans and carnists. Watch her talks and take her classes in Effective Vegan Advocacy. Subscribe to her online newsletter at Carnism.org.

Farm sanctuaries are part of a rocking revolution to end animal agriculture. Learn about the organization that spearheaded this movement in 1986, FARM SANCTUARY, at FarmSanctuary.org. See the global dimension of this movement at SanctuaryFederation.org. Spend time with rescued farm animals to experience their sweet, funny, affectionate personalities. Feel the redemptive love of a chicken relaxing in your arms, renewing your reverence for life. There are farm sanctuaries all over New England that need your love and support. Donate funds and supplies, and spread the word to others. A simple online search for “farm sanctuaries New England” will bring up the names of several near you.

Many livestock and dairy farms are awakening to a touching transformation. They are transitioning to sanctuaries and plant-based farming. Meet the woman who sparked this revolution, RENEE KING-SONNEN at Rowdy Girl Sanctuary in Waelder, Texas. See her inspiring story on YouTube and her site RowdyGirlSanctuary.com. Become a member of her highly effective Rancher Advocacy Program (RAP) to keep this fire burning. Attend the semi-annual RAP Summit to connect with this extraordinary movement.

PEOPLE FOR THE ETHICAL TREATMENT OF ANIMALS (PETA) is the largest animal rights organization in the world with over nine million members and supporters globally that reach in to all areas of animal liberation. PETA addresses everything from suffering wildlife to abandoned and abused dogs to animal cruelty across all industries. Become a donating member of PETA and be on the front lines of their inspiring rescue stories and other triumphs. Find out more at PETA.org.

You can find local vegan groups on FACEBOOK for pot luck gatherings and activism — sometimes on the same day! Search “Vegan Groups,” “Animal Activism,” or any related subjects. Meet each other at demonstrations and disruptions. A disruption is when activists invade business with signs, megaphones and imagery to drive the home the point that violence against animals is unacceptable.

If you’re seeking employment on behalf of animals and vegan living, check out VeganJobs.com. PETA lists jobs there often in communications, research, investigation and rescue. See the range of employment opportunities from animal activism to vegan product development to restaurant management.

Support your LOCAL VEGAN RESTAURANTS. Express appreciation for plant-based options in non-vegan establishments. Encourage them to expand their vegan offerings. Managers and cooks may not know the scope of pleasing plant-based flavors until you educate them, which is often a worthy outreach conversation. Create connection and change wherever you can.