When Art Goes Viral, Will It Also Go Extinct?

My basement is annointed with plastic tubs filled with photos I took during the first years of my now 16-year old son's life. My piano bench is home to the notesbooks of lyrics and staffs to the songs I wrote when I was 16 to 21. My bookshelves include physical copies of not only the books and magazine articles I have written over 27 years, but also a plethora of meaningful tomes about healing, psychology, relationships, nature and all subjects dear to my heart.

Tapes and CDs adorn my bedroom, offering the opportunity at a moment's notice to journey through time with songs. There is something comforting about being able to reach out and touch not only parts of my life history, but also the wealth of sensual nourishment that music, photos, books and other forms of artistic expression provide.

In our increasingly virtual world, anything physical can be relegated to judgment as "clutter." For me, these physical artistic relics are treasures, and my room, the treasure chest.

As our world becomes more virtual, these treasures — all products of creative expression — become increasingly optional, and in some cases, on the verge of extinction. Why clutter your home with things if you can get it online or on your iPod? I feel sad that what might be sacred to me might be considered archaic archives, but without recognized historical value. What I find even more disturbing is that if my iPod fails me, if my computer crashes, and if everything backed up gets lost in the cloud, there will be no physical traces of my sacred items.

When my son has children, and technology has evolved to a state we cannot even imagine today, how can I show them the photos that document their pre-birth family history, if I have not taken measures to preserve them through physical photo albums? Will the online photo albums of the year 2012 become as archaic as the record player but without the physical status to allow an archeological dig?

When art existed only in the physical world, we took more care to preserve it, archive it and treasure it. Now, people create images or click their smartphone camera and delete them as fast as they created them. They are just entertainment tidbits for the moment. We are so in the "now" that we forget there is a context of past and future too.

Even more fundamentally, the industries that served musicians, photographers, writers and other artists have gone the way of the dinosaur. I recorded a tape of original music in 1983 in a recording studio on reel-to-reel equipment. Today, people record music at home on their computer. Sadly, the value-added of the sound engineer (as well as the sound engineer's livelihood) gets lost in the shuffle.

While it might be exciting to skip the two-year production cycle it used to take from writing a book to having a physical copy in hand, I assure the e-book that was "written over the weekend" sans editor is not at the same quality level! We are so focused on instant gratification that we rarely take the time to create the quality product that will stand the test of time.

Perhaps it is because I am kinesthetic first and visual second that all the popular e-platforms don't grab me. Kindle, no thanks. I want to touch my book and mark it up with my pen! iPod, help! I like to see ALL the material on my CD in one glance, and have a simple enough selection that I can wrap my mind around it!

While some people say that our virtual technology for publishing photos, books, articles and art is revolutionizing the world the way the Guttenburg Press once revolutionized publishing, I worry that this evolutionary wave will leave more casualties in its wake. Like the difference between a nuclear cloud and a BB gun. Might we be losing more ground than we are gaining?

There is a spiritual aspect of physical art as well. Bringing a vision into physical form grounds it. It anchors it. It assures that it is real. While a fire may burn away precious archives, somehow that feels like less of a risk than computer software evolving to burn away what was once "state of the art."

When I was in 8th grade, my class made a time capsule and buried it in the schoolyard with the possibility of digging it up decades later. Could the kids of today make a "virtual time capsule" and be assured it would even exist decades later? 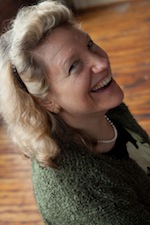 I feel strongly that music, photographs, books, paintings and other art forms benefit from having a down-to-earth, old-fashioned physical representation. Imagine what future archeologists will be missing if they try to unearth a world so enamored with virtual reality? Or will we evolve to cloud dwellers who exist online but not in human form? Ask Siri. She has an answer to everything!

Linda Marks, MSM, has practiced body psychotherapy, coaching and mediation with individuals, couples, families and groups for 27 years. The author of two books and hundreds of articles, she has led workshops nationally and internationally, and has appeared on radio and tv. Read more from Linda’s blog at healingheartpower.blogspot.com.