The ready availability of technology may make the children of today faster at configuring a new smartphone, but does all of that screen time affect the development of their eyes?

While conventional wisdom dictates that children should do less up-close viewing, sit farther from the television and perhaps even wear their eyeglasses less, we have found in recent studies that another factor may be at play: Kids need to go outside, and, if not play, at least get some general exposure to outdoor light.

To our surprise, more time outdoors had a protective effect and reduced the chances that a child would go on to need myopic refractive correction in the future. The size of the effect was impressive.

Myopia, or nearsightedness, is a condition in which you can’t see far away but can see up close – without glasses or contact lenses. It typically starts during the early elementary school years. Because kids don’t know how other kids see, they often think their blurry vision is normal, so regular eye examinations are important during childhood.

With myopia, the eye is growing, but growing too long for distant rays of light to focus accurately on the back of the eye. A blurry image results. 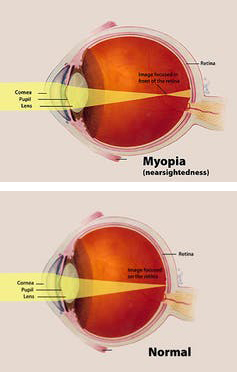 For children, eyeglasses or contact lenses move the focus back to the retina, and a clear image is formed. The too-long eye measured from front to back cannot be “shrunk,” so refractive correction is then a lifelong necessity. In adulthood, surgery is an option.

But kids don’t always like wearing glasses, sometimes with good reason. It is harder to play sports in them. Swimming is nearly impossible, and kids tend to lose or break them.

Myopia On The Rise

A worldwide epidemic of nearsightedness has been reported, associated with a combination of genetic and environmental factors. Besides creating the need to wear eyeglasses or contact lenses or to seek a surgical remedy, myopia can result in blinding eye diseases late in life, like retinal detachment or degeneration.

Risk factors include having myopic parents. A debate about the influence of reading and other close work has flourished for more than a century.

The bad actor in the environment was always assumed to be near work, such as reading, sewing and now computer, video game and smartphone usage. That theory makes so much intuitive sense. The eye in childhood is naturally growing longer, even in normally sighted children. In a child developing myopia, the eye grows to focus on the frequently observed, near-viewing field.

No less than Johannes Kepler, the astronomer and inventor who refined glass lenses for eyeglasses, was convinced that his poring over astronomical charts and calculations in the late 1500s was responsible for his nearsightedness. Kepler had it right when it came to the orbit of planets, but he was wrong about how the environment influences prescriptions for eyeglasses. The latest evidence says that near-work is not to blame for nearsightedness.

We studied this question for over 20 years in 4,979 children as part of the Collaborative Longitudinal Evaluation of Ethnicity and Refractive Error (CLEERE) Study, funded by the National Eye Institute, in order to put near-work, computer use and watching television in their proper place – essential for study and recreation but not an important factor in whether a child will need glasses.

If a child has two nearsighted parents, the hereditary genetic effects increase the child’s chances of needing glasses to about 60 percent, if time spent outdoors is low.

More time outdoors, about 14 hours per week, can nearly neutralize that genetic risk, lowering the chances of needing glasses to about 20 percent, the same chance as a child with no nearsighted parents claims.

A recent survey of papers from around the world, including Australia, England and Singapore, in the last decade align almost perfectly with what we published in 2007 from the Orinda Longitudinal Study of Myopia.

Parents may ask: What about children who already wear glasses? Does more time outside help already nearsighted children?

Unfortunately, we and others have found that time outdoors has little to no effect on how prescriptions change over time in children who are already nearsighted, although more study of this is ongoing.

So what’s so good about being outdoors for a child without glasses? There are several theories.

One is that children may exercise more when they are out of doors and that exercise is somehow protective. Another is that more ultraviolet B radiation from the sun makes for more circulating vitamin D, which somehow prevents abnormal childhood eye growth and myopia onset. Yet another is that light itself slows abnormal myopic eye growth and that outdoors, light is simply brighter.

The dominant theory is that the brighter light outside stimulates a release of dopamine from specialized cells in the retina. Dopamine then initiates a molecular signaling cascade that ends with slower, normal growth of the eye, which means no myopia.

Evidence from our work and from animal models of myopia indicate it’s the actual light exposure, not just a decrease in the time spent reading because children are outdoors, that may work the magic.

There’s clearly much more to learn, but before you send your children out to run around the block, remind them to put on sunscreen and to wear sunglasses. Even as time outdoors might prevent the development of nearsightedness, parents will want to ensure they aren’t creating other skin and eye problems from ultraviolet light exposure.

See also:
How To Raise An Environmentalist
Letting Kids Stand More In The Classroom Could Help Them Learn